All of which makes Road America a fitting backdrop for drivers, mechanics, and fans yearning to see yesteryear racing.

Elkhart Lake’s 14-turn, 4.048-mile road course comes to life with horsepower blasts from the past with the WeatherTech International Challenge with Brian Redman, July 14-17. The show-and-tell race showcase, known worldwide, is considered one of the largest and most prestigious national vintage racecar calendar events.

The field includes 400-plus entries of all makes and models, featuring many of the world’s rarest and most pristine race cars from nearly every era of racing. True to tradition, the event brings out fan-favorite marques, with the AAR Eagle serving as the feature for 2022.

As such, fans will have the unique opportunity to see the largest contingent of AAR Eagles assembled, including the 1967 Eagle Gurney Weslake Mk1 F-1 serial no. AAR104. Dan Gurney won the Belgian Grand Prix with this car in June of 1967; he became only the second American to drive an American car to a Grand Prix Victory. Dan built this unique Eagle, named the mag-ti car for the magnesium and titanium in its structure. Using exotic materials overcame the Eagle’s weight disadvantage, which stemmed from sharing a standard design with the Indy version. It all came together at Spa-Francorchamps when Dan outran the world’s fastest Grand Prix cars to seize victory for himself, the Eagle, and the United States.

The 1974 Jorgensen Eagle – Indianapolis 500 car – Serial No. 74004 will also be available to view. This car won the Indianapolis 500 in 1975. It was the first 500 victory for sponsor Jorgensen, the second for driver Bobby Unser, the third for car builder Dan Gurney, and the thirtieth for a Drake-Offenhauser engine. 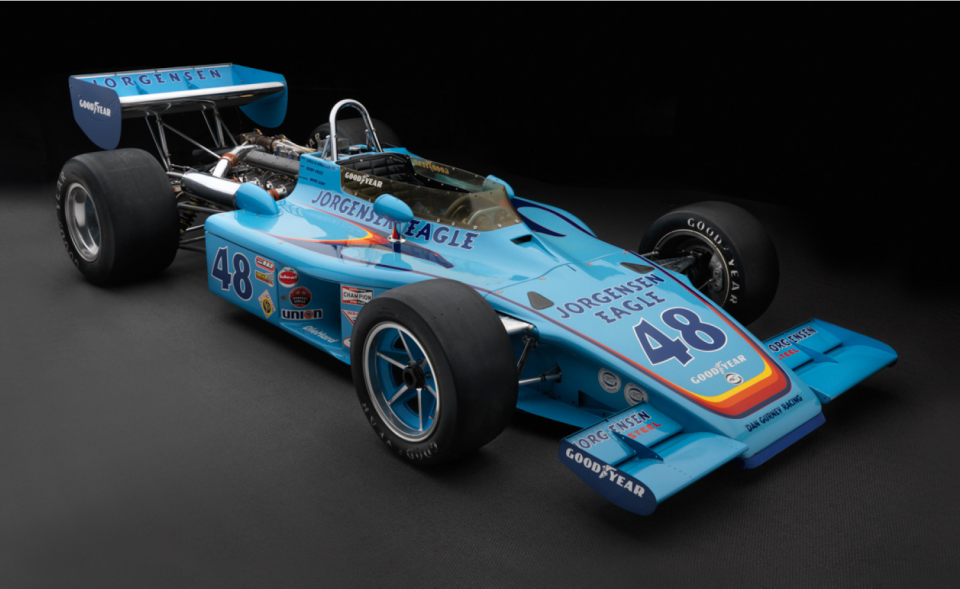 The Revs Institute and Miles Collier Collections made both Eagle appearances possible.

A mid-summer classic including everything from a special Concours on Friday and Saturday along the streets of Elkhart Lake and a special AAR Eagle racer reunion makes the 2022 event a can’t miss spectacle for any racing enthusiast.

“This event has become an annual tradition for hundreds of racers, enthusiasts, and thousands of fans every year,” said George Bruggenthies, Senior Consultant for Road America. “We are extremely proud that the event will pay tribute to the AAR Eagle as we honor Dan Gurney’s All-American Racers creation and the lineage of racers and champions who drove these beautiful machines. These cars are art, much more so now than when they raced. Now, cars are much more practical. In those days, a lot more went into the car’s design and aesthetics, and that’s something that we celebrate.”

Road America is equally poised to usher in the celebration with a racer’s reunion, races for club and pro series–vintage, historical and contemporary racers; a Concours with expert and people’s choice awards, track touring, parade laps, and a vendor marketplace, making the 2022 WeatherTech International Challenge with Brian Redman an event that everyone of all ages can enjoy.

Most machines are in mint condition through extensive restoration, and many attain straightaway speeds over 150 miles per hour.

But vintage car racing isn’t about going wheel-to-wheel or challenging the leader bumper-to-bumper through tight corners and narrow passing zones in the straightaway.

“It’s hard racing, but it’s not running somebody into the wall or pushing them off the track … that kind of thing,” Bruggenthies said. “Many cars out there will be driven hard and fast, but in vintage racing, there’s much more respect for the vehicles than other types of racing.”

Bruggenthies encourages fans to take in the road course from all viewpoints, visit the paddock and pit area and see the cars and drivers up close between races.

The event is, first and foremost, a family-friendly experience, a time to revere racing’s past, Bruggenthies added.

“It’s a great tribute to all the great days in motor racing,” he said. “Nowadays is great, too, but these were fabulous days with wonderful cars and big personalities. It is a salute to all of that.”

In addition to the races, make time to attend the Road America Concours d’ Elegance in downtown Elkhart Lake, Wisconsin, on Friday, July 15, and Saturday, July 16, from 6-8 p.m. Thousands of fans flock to Elkhart Lake each year to see a thrilling display of racecars and exotic sportscars throughout the historic downtown area. The Friday evening display will feature vintage racecars. The Saturday evening showcase features luxury sports cars rarely seen otherwise. This spectacular display of high-performance race machines is a can’t miss event for any enthusiast or casual observer. Be sure to come out early and grab a bite to eat at one of Elkhart Lake’s premium dining establishments to beat the rush.

Event details, ticket pricing, and camping information can be found at www.roadamerica.com  or by calling 800-365-7223. Anyone 16 years old and under is FREE with a paying adult at the gate. Racing runs rain or shine.