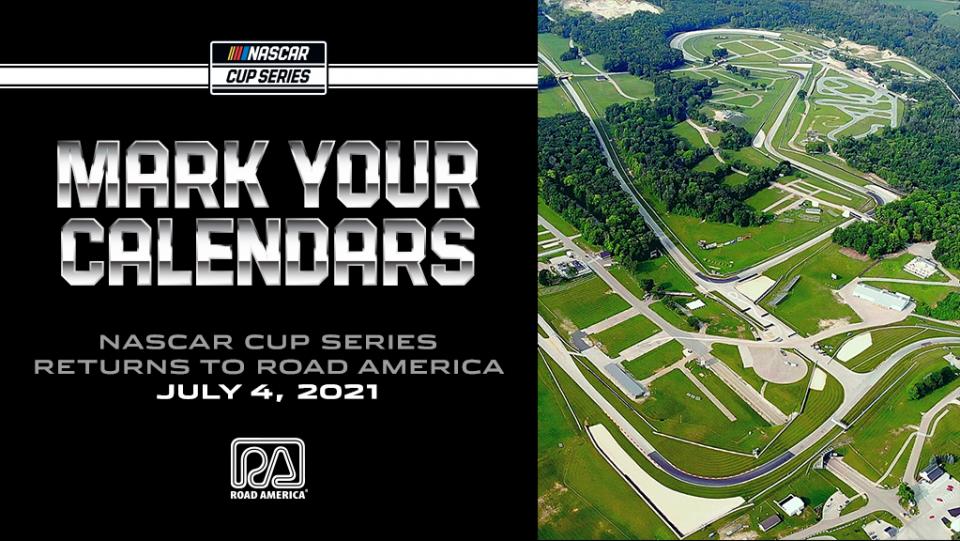 ELKHART LAKE, Wis., - September 30, 2020 - Road America announced today that the NASCAR Cup Series will run at America’s National Park of Speed on the Fourth of July in 2021. Start times and broadcast details are still being determined and will be announced at a later date.

“Since we welcomed the NASCAR XFINITY Series in 2010, our fans have been asking for the NASCAR Cup Series, and we are very proud to make it happen on the Fourth of July,” said Road America’s President and General Manager, Mike Kertscher. “The weekend is going to be memorable and exciting for everyone as we celebrate Independence Day at America’s National Park of Speed. We encourage new and returning fans to get their tickets and campsites early because we intend to host four full days of on-track action. Our entire staff is excited to welcome the teams, drivers, and new visitors to show them that Road America is the ideal facility to come for the experience and stay for the race.”

Most NASCAR fans are not old enough to remember the first time NASCAR racing came to Wisconsin. The date was Sunday, August 12, 1956, and at the urging of Carl Kiekhaefer of Fond du Lac, Wisconsin, the Grand National Division (now NASCAR Cup) ran the 37th event of 56 that counted towards the championship battle. Many of the 26 drivers who took the green flag that day read like a who’s who of the early days in NASCAR racing – Lee Petty, Junior Johnson, Buck Baker, and Fireball Roberts were a few notables, but Tim Flock took the checkered flag, in the rain, driving a Mercury, at a speed of a top speed of 71.4 mph.

In 2021, fans will have the opportunity to watch NASCAR’s future stars such as Cole Custer, Tyler Reddick, Christopher Bell, Chase Elliott, and Erik Jones battle it out with superstars such as Kyle Busch, Martin Truex Jr., and Joey Logano on the storied 4-mile, 14-turn road course. Road America has a legendary history of featuring brilliant racers on a challenging circuit that easily separates the good from the great drivers.

Tickets are now available, and additional event details, ticket pricing, and camping information can be found at www.roadamerica.com or by calling 800-365-7223. Anyone 16-years-old and under is FREE with a paying adult at the gate. Racing runs rain or shine.