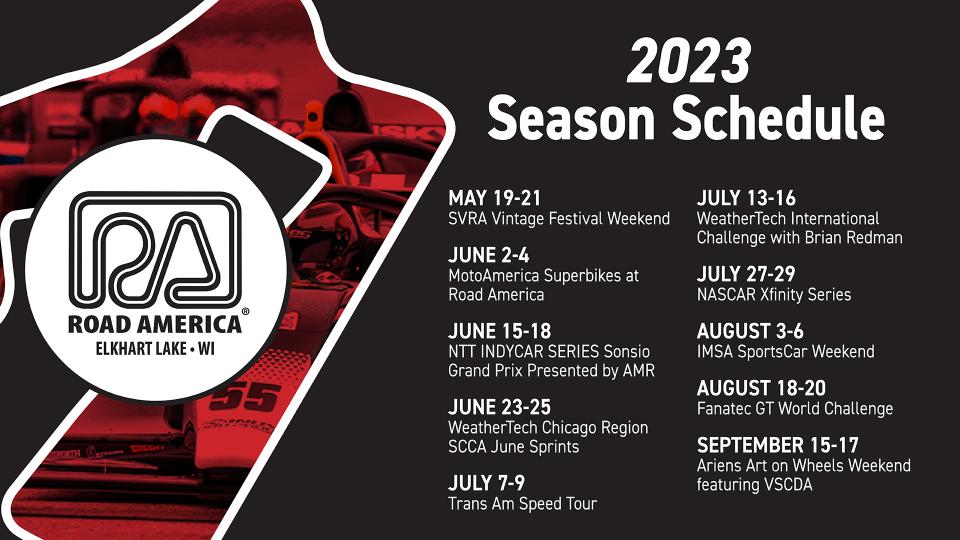 ELKHART LAKE, Wis., – September 27, 2022 – Road America announced its 2023 season schedule today. Ten events are on next year’s season schedule, and you won’t want to miss a minute of the action.

“America’s National Park of Speed is ready for another amazing summer full of thrills and excitement. Our schedule is loaded with weekends full of cars and motorcycles ranging from vintage to state-of-the-art,” said Road America’s President and General Manager, Mike Kertscher. “We look forward to hosting the MotoAmerica Series, NTT INDYCAR SERIES, NASCAR XFINITY Series, and the IMSA WeatherTech® SportsCar Championship. Plus, weekends featuring the Fanatec GT World Challenge Series, Sports Car Club of America, and three separate vintage events in 2023, all of which will compete on an entirely new track surface. Our repaving project is expected to begin shortly after ‘23 tickets go on sale and will be complete by October 26, weather permitting. We look forward to seeing everyone here in 2023.”

The 2023 Road America Season Schedule is as follows, and support series details for all events will be determined at a later date:

Road America’s season pass is the most affordable way to attend all the events, with over 50 days of action. The season pass is available at an advance price of only $520, and the price increases to $560 on October 3. January 1 through June 1, 2023, the price for a season pass is $645. Each season pass provides admission, special events, and incentives for club events - details are available at www.roadamerica.com/season-pass

Anyone 16 and under gets in FREE when accompanied by a paying adult at the gate. For full event details and information, visit www.roadamerica.com.