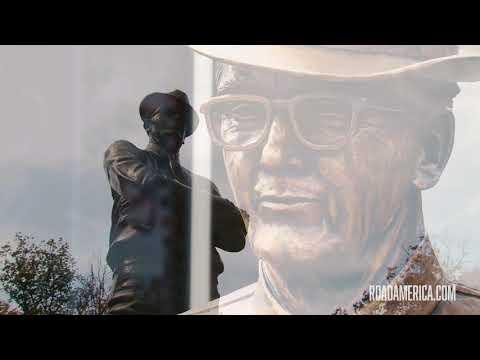 ELKHART LAKE, Wis., - October 9, 2020 - Road America today unveiled a new bronze statue of its founder, Clif Tufte, next to the center that bears his name located in the paddock area of the sprawling 640-acre facility that was conceptualized sixty-five years ago. Tufte, a highway engineer, put together the land and laid out the track in 1955 after racing on the public roads around Elkhart Lake became impractical for many reasons.

When Tufte realized that the economic benefit to the area was such that a permanent road course could be viable. He acted, and Road America was born, with the first races held on September 10-11, 1955. That event, won by Phil Hill in a Ferrari Monza by an eyelash over Sherwood Johnston in a D Jaguar, began a tradition that lasts to this day.

Sculptor Tom Holleran created the tribute to Tufte, which is based on several photos collected over the years from friends, family, and SCCA Chicago Region members. After months of collaboration, the contributors decided on a version that represented Tufte’s true presence, from his tipped hat – to the stance he regularly had when surveying his vast creation. The statue committee says the statue is meant to be a gathering point. Intended to inspire others to dream and believe. A bench nearby is inscribed with a quote from the 1955 edition of the SCCA Chicago Region’s publication Piston Patter which reads, “Let there be no mistake, when the record of Road America is written into the history of sports car racing, one name will stand alone. Although he sought and received help from any qualified source, he and he alone – had the vision, courage, and the ability to carry out the construction of a superb course. While the rest of us talked, he built. The man? Clif Tufte.”

“I think it’s perfect, just absolutely perfect, for our fans, our organization, and for everyone that knew Clif,” said Road America’s President and General Manager, Mike Kertscher. “As everyone who knew Clif has responded  ‘that is him’, as far as how he was and how his presence should be remembered. I also want to extend our gratitude to the SCCA Chicago Region, the Road America Board of Directors, and especially the Tufte family who made this tribute possible. Now Clif’s likeness will endure well beyond the next 65 years and inspire others for generations to come.”