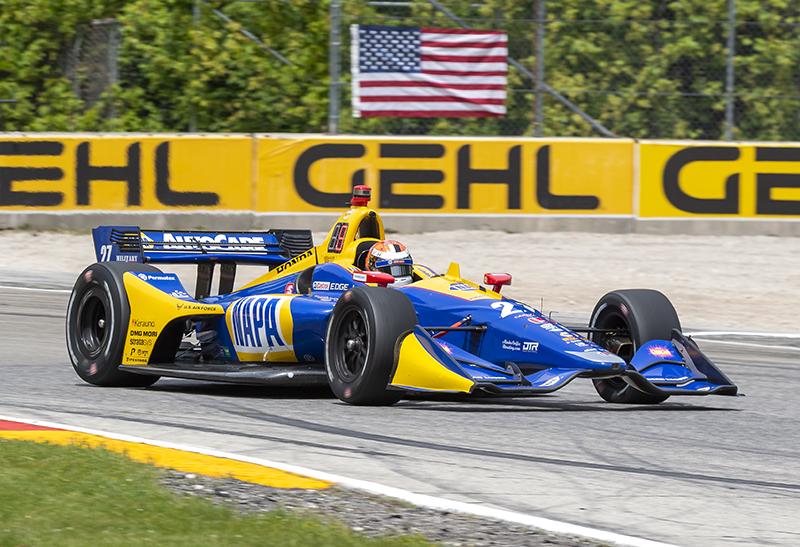 Alexander Rossi left his IndyCar Series colleagues in the Road America dust in 2019, leading a record 54 of 55 laps in the REV Group Grand Prix presented by AMR.

Rossi gained the lead on Turn 1 from pole-sitter Colton Herta and never looked back. It was the best result in four IndyCar appearances at the track for the Andretti Autosport driver, who finished 28.491 seconds ahead of runner-up Will Power.

“It was a good win for us and critical in the championship standings,” said Rossi, who finished third behind Simon Pagenaud and champion Josef Newgarden for the IndyCar title. ”It was a great day for us, and one that I’ll cherish for a long time.”

The 29-year-old Californian looks to add two more wins to his Road America victory log when the NTT INDYCAR Series returns for a doubleheader July 9-12. The first IndyCar event, with fans, in 2020.

Rossi considers himself a Road America veteran, since his time working with the Skip Barber national series at the 4.048-mile, 14-turn permanent road course. He ran Formula BMW, and also competed in races at Road America for Champ Car’s support series.

“It’s a track that I’ve been racing on since 2005, and I’ve been lucky enough to turn a lot of laps there,” said Rossi, who won two Formula BMV events at Road America in 2008.

“It’s definitely in the top three or four of my favorite tracks. I’ve been running road courses nearly my whole life until I started running IndyCar. My whole career has revolved around road courses.”

Rossi is confident that drivers in the IndyCar field will be as prepared as possible for running at Road America. He added that crew members in the garage area, pits, and in the race shop, are doing a fair amount of the heavy lifting on race days.

“In IndyCar racing and motorsports racing, all of the drivers are pretty much on their marks,” said Ross, the 2016 Indy 500 champion. “A lot of it comes down to the car and I think you have to give a lot of credit to the team, especially when you’re able to win by a large margin.

“There’s a lot that goes into the engineering side of the car with regard to execution on that particular day. A lot of what we do is a team effort.”

Rossi said that he’s grateful that IndyCar executives and Road America officials were able to coordinate the schedule to fit two races in at Elkhart Lake.

“We appreciate the support and enthusiasm that Road America has for IndyCar races,” Rossi said. “You obviously, can’t forget the fans from that standpoint and what they’ve done with IndyCar’s return to the facilities; they took a break and came back in 2015.

“The reception at Road America is fantastic and we love coming there. I love going there, and it’s a beautiful track and a beautiful part of the world.”

Fanatics of American open-wheel racing will have the chance to enjoy Vintage Indy™ which was added to the event line-up for the REV Group Grand Prix presented by AMR Doubleheader weekend, July 9-12.


During the event, several historic open-wheel race cars will traverse the 4.048-mile road course in multiple sessions demonstrating the cars on-track, sandwiched between breaks where spectators can visit a designated paddock area to see the machines up close and personal.


The weekend schedule will also be bolstered by Indy Pro 2000, and USF2000 races which help develop the stars of tomorrow with many drivers on the NTT INDYCAR Series grid as graduates.

The green flag for the first race of the NTT INDYCAR REV Group Grand Prix Presented by AMR Doubleheader on Saturday drops at 4:15 p.m. Central.

Under the guidance of public health officials, medical experts and local, state and federal authorities, INDYCAR and Road America will observe safe social distancing practices and provide enhanced hygiene and safety precautions for all fans attending the event.

All guests will be screened in their vehicles with contactless temperature checks before entering the parking areas, and only essential racing personnel will have access to the INDYCAR garage area. A PPE kit that includes a face mask, as well as hand sanitizer will be provided to each guest upon arrival to the track.

Fans are encouraged to practice safe social distancing and wear a cloth face-covering where social distancing is difficult to maintain. Enhanced cleaning and sanitizing procedures will also be implemented throughout the facility during the weekend. Additional protocols and guidelines for spectators can be found at www.roadamerica.com/safety


Online: Visit www.roadamerica.com Tickets are available 24 hours a day, seven days per week. For ease of entry, fans are encouraged to print tickets at home to save time and enjoy a quick and contactless experience at the gates.

Anyone 16-years-old and under are always FREE with a paying adult at the gate.

All active-duty first responders will receive FREE entry to the REV Group Grand Prix presented by American Medical Response weekend. First responders, including law enforcement, fire, paramedics, and emergency medical technicians, will be admitted free of charge by showing valid identification indicating active service in the form of a department-issued ID, badge, copies of certifications or an active roster copy from their department on department letterhead. FREE admission must be redeemed at the gate and is only valid during the event weekend.