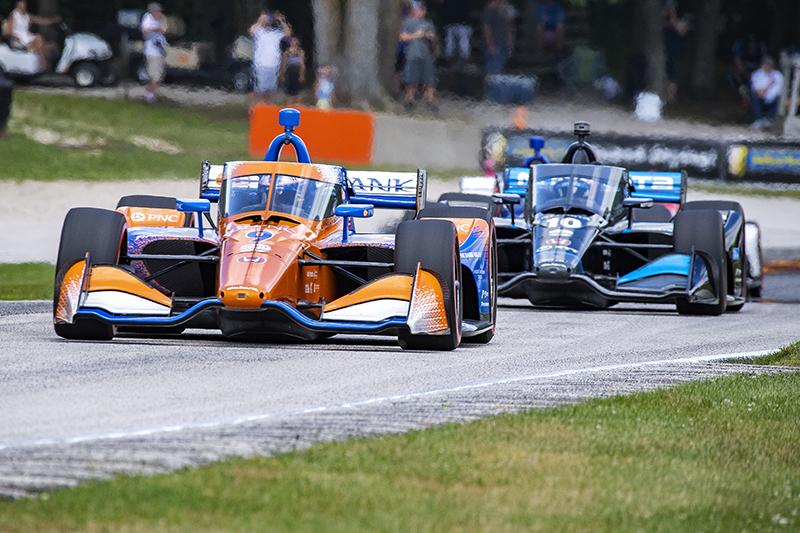 Dixon was a CART Series rookie driving for PacWest Racing in 2001 when the New Zealander competed in his first event at the track.

A spirited battle between Dixon and Michael Andretti a couple of decades ago is the most vivid memory for the rookie of the year candidate.

“We had a hot battle,” Dixon said of Andretti, who won four open-wheel championships. “Michael kind of ran me off in the grass, the little straight there between (turns) three and four, and we made a bit of contact in five.”

Working on the tenth lap, Andretti overtook Dixon for sixth place in the first turn. Dixon bumped the back of Andretti’s car, which sent the car into a spin in turn five. Andretti recovered and continued.

“Getting my first win there was massive, but I think my memory there in racing Michael was definitely one that I think of the most,” Dixon said.

One of the best-known incidents in the 2001 race was when Memo Gidley hit the Billy Mitchell bridge concrete abutment in turn 13, and Dixon swiped the nose of Gidley’s spinning car. Gidley walked away with a broken arm.

“It was a pretty wild race,” recalled Dixon, who finished fourth that day.

The six-time IndyCar champion, who drives a Honda for Chip Ganassi Racing, is the lone competitor to win two events in the series’ five races at the track.

Dixon started ninth in 2020 and passed Will Power on the final pit stop to lead 16 laps of the 55-lap race and won by a 2.538-second margin. Felix Rosenqvist won the second race of the Road America doubleheader last year.

Dixon’s first career victory at Road America occurred in 2017 when he was bolted in front of Josef Newgarden on a restart midway through the race and held off Newgarden on another restart.

The 40-year-old says he enjoys the competition and nuances of Road America.

“My favorite worldwide would be Phillip Island,” Dixon said. “I really like Watkins Glen, and Road America is right up there.

“With Road America, it also is the small-town vibe, which is similar to those three circuits, in general. Where the town really gets behind it. As far as the history, side of it, Road America is huge as well.”

Dixon said there are many challenging and rewarding sections at Road America and added that it’s difficult to string together a perfect lap. The long period before corners is also an intriguing dynamic.

“It’s always got these tricky corners where you can gain a lot, but you can also lose a lot,” Dixon said. “For me, the complexities of turns five and six are very tough. It’s very easy to overextend yourself, and then that’s the same for 13 as well.

“Now, also, the entry to 14, the last corner, because of the difference you feel from apex to the small bump there. I guess compromised sums up the track the best. It’s almost impossible to get a perfect lap at that circuit, just because it’s so long, the actual layout of it, it’s tough to get it 100 percent correct.”

Like many amateur and professional drivers who’ve tackled Road America, Dixon likes the Carousel in turns nine and 10. The right-hand turn Carousel is nearly flat and drops downhill.

“I think everybody kind of really enjoys the Carousel just because it goes so long,” he said. “The Carousel, for me, is a trigger point in the race to create some really good overtaking, so I think I enjoy the carousel the most.”

The weekend schedule, June 17-20, will also be bolstered by Vintage Indy and the Radical Cup series, plus two junior development series of the Road to Indy Presented by Cooper Tires, the Indy Pro 2000, and USF2000, of which many drivers of the NTT INDYCAR SERIES are graduates.

Tickets are available, and fans are welcome. Additional event details, ticket pricing, and camping information can be found at www.roadamerica.com or by calling 800-365-7223. Anyone 16-years-old and under is FREE with a paying adult at the gate. Racing runs rain or shine.

All first responders including Police, Fire, and EMS receive FREE access for the entire NTT IndyCar Series REV Group Grand Prix presented by American Medical Response Weekend by showing proof of active status at the gate in the form of a department-issued ID, badge.